With the possibility that the sea level in Istanbul's Bosphorus Strait might rise by 3 to 5 meters, there are fears that buildings along the strait's shore might submerge if the temperature increases by 3 degrees Celsius by the end of the century, according to a parliamentary report. 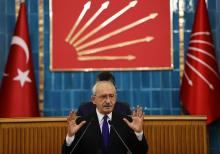 Main opposition Republican People's Party (CHP) leader Kemal Kılıçdaroğlu has urged the government to create employment for nearly 10 million unemployed people in Turkey, warning that this population could be a source of social problems over time.

President and Chairman of the Justice and Development Party (AKP) Recep Tayyip Erdoğan has renewed his A-team in the party following the general convention, appointing his closest aides Binali Yıldırım and Numan Kurtulmuş as the deputy leaders and four new figures to his executive board.

President Recep Tayyip Erdoğan will make changes within the party and his team in the upcoming days, ruling Justice and Development Party (AKP) Deputy Chair Mahir Ünal said on March 23, elaborating on a possible cabinet reshuffle.

President and Justice and Development Party (AKP) Chairman Recep Tayyip Erdoğan will reveal a comprehensive manifestation about his party's objectives in the coming period including a road map for 2023, the year Turkey will celebrate its centennial and hold parliamentary and presidential elections.

The constitution and laws set the procedure concerning the closure of a political party, and it is for the Constitutional Court to decide whether to close a party, Justice Minister Abdulhamit Gül said on March 8.

A majority of the Turkish population believes that Turkey needs a new constitution, but it must be written within a suitable political climate, the head of the main opposition party has said, in reaction to the government's calls for the political parties to join their efforts to renew the charter.