Brdo pri Kranju – President Borut Pahor and Prime Minister Janez Janša highlighted Slovenia’s good relations with all of its neighbours as they hosted the annual reception for the diplomatic corps at Brdo pri Kranju on Tuesday, which was attended by some 85 diplomats accredited to Slovenia. Pahor also discussed relations with Russia and China.

Ljubljana – President Borut Pahor has said as he responded to PM Janez Janša’s statements about China and Taiwan that ever since Slovenia and China established diplomatic relations, Slovenia has consistently advocated a one-China principle, a principle the EU is also bound to.

Ljubljana – A firefighters’ trade union is critical of the government-proposed changes to the fire service act, as it says it was not involved in the drafting of the amendments. Some of the proposals that had already been coordinated with the competent ministry in the past have been dropped from the latest version, the union noted.

Beijing – The Ministry of Foreign Affairs of China labelled on Wednesday Prime Minister Janez Janša’s statements about Taiwan as “dangerous”, and expressed strong opposition. The reaction comes after Janša said in Monday’s interview with an Indian TV station that Slovenia and Taiwan were discussing setting up mutual representation offices.

Ljubljana – The Credentials and Privileges Commission proposed that the National Assembly appoint to the programme council and supervisory board of public broadcaster RTV Slovenija five candidates each who had been proposed by the coalition, the Pensioners’ Party (DeSUS) and the opposition National Party (SNS) much to the chagrin of the centre-left opposition. 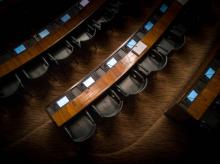 Rome – The council of the Alliance of Liberals and Democrats for Europe (ALDE) discussed on Saturday the merger of the Slovenian coalition Modern Centre Party (SMC) with the Economically Active Party (GAS) into Concretely. It decided that this effectively ended the membership of the SMC in ALDE, and that the new party could again apply for membership.