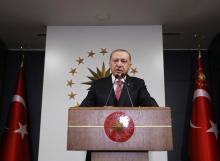 Turkey's president on March 30 launched a National Solidarity Campaign to aid fight against the novel coronavirus.

Announcing the "We are self-sufficient, Turkey" campaign, Recep Tayyip Erdoğan said he was donating his seven months of his salary as a way to kick start the fundraiser and added that several ministers have already joined as well.

Despite the apparent evacuation of a makeshift camp set up by migrants at the border region between Greece and Turkey, forces will remain in the area to ensure that nobody attempts to break through the fence, Prime Minister Kyriakos Mitsotakis said in a teleconference with cabinet ministers on Friday to discuss the situation at the Evros region.

President Tayyip Erdogan will hold a teleconference on Tuesday with German, French and British leaders to discuss Turkey's standoff with the European Union after it opened its borders to migrants trying to enter the bloc.

As far as Recep Tayyip Erdogan is concerned, it's not just German Chancellor Angela Merkel who's a Nazi; so is Greek Prime Minister Kyriakos Mitsotakis. And while French President Emmanuel Macron is "brain dead" and all Europeans are "fascists," Greeks are "barbarians." Once more, the Turkish president has gone too far, making vulgar accusations and comparisons to Nazi atrocities.

Turkish military's "devastating display of power" with its effective domestic drone program against the Syrian regime in Idlib has changed the military equation against Russia, NATO officials said, according to a report.

President Tayyip Erdogan said on Tuesday he would not stop migrants trying to cross Turkey's border into Greece despite EU pressure to do so, but he also announced a summit next week in Istanbul with European leaders to seek a solution to the crisis.

The United States has offered to sell Turkey its Patriot missile defence system if Ankara promises not to operate a rival Russian system, Turkish President Tayyip Erdogan said, in what he called a significant softening in Washington's position.

Nearly 1,000 migrants tried to cross into Greece from Turkey in the past 24 hours despite tight border security, Greek officials said on Tuesday, suggesting little respite in a nearly two-week diplomatic bust-up between Ankara and the European Union.

Turkish Foreign Minister Mevlut Cavusoglu said on Tuesday that a 2016 agreement between Turkey and the European Union needs to be updated, taking into account developments in Syria, and that Ankara was ready to work constructively on the issue.

Turkish President Tayyip Erdogan sought more European support on Monday over the war in Syria and for hosting millions of Syrian refugees, but was told he must first stop encouraging migrants to cross into Greece.