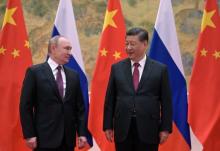 The Chinese government sharply criticized COVID-19 testing requirements imposed on visitors from China and threatened countermeasures against countries involved, which include the U.S. and several European nations.

China Evergrande has pledged to repay its debt this year, as the property giant faces a restructuring following Beijing's crackdown on excessive borrowing and rampant speculation in the real estate sector.

China's manufacturing activity contracted sharply in December for the third month in a row, according to official figures released on Dec. 31, despite Beijing's loosening of Covid restrictions at the beginning of the month.

Travellers from China now face restrictions when entering more than a dozen countries as concern grows over its surge in Covid-19 cases, with Australia the latest to demand a negative test before arrival.

China's economic growth accelerated in the latest quarter but still was among the weakest in decades as the ruling Communist Party tries to reverse a downturn while enforcing anti-virus controls and a crackdown on debt in its vast real estate industry.

In order to ensure that its economic and political interests in the Korean Peninsula region are not threatened by the West, China wants North Korea to avoid sabre-rattling, especially during the National Congress, where Chinese President Xi Jinping will be declared President for an unprecedented third term, media reports said.

The United States has announced new export controls aimed at restricting China's ability to buy and manufacture high-end chips with military applications, stepping up tensions between the countries.

President Xi Jinping is using his first trip abroad since the start of the pandemic to promote China's strategic ambitions at a summit with Russia's Vladimir Putin and other leaders of a Central Asian security group.

State support for China's economy this year is now greater than it was in 2020, Beijing's premier has said, surpassing help given at the height of the coronavirus pandemic as the country grapples with the impacts of its zero-COVID policy and a property sector crisis.