Economy of the United States

President Donald Trump's younger brother, Robert Trump, a businessman known for an even keel that seemed almost incompatible with the family name, died on Aug. 15 night after being hospitalized in New York, the president said in a statement. He was 71.

The expiration of a $600 weekly jobless supplement at the end of July likely contributed to the decline in claims reported by the Labor Department on Thursday. Reports from payroll scheduling and workforce management firms suggested a decline in employment in early August due to the spread of new COVID-19 cases across the United States.

According to the balance of payments figures released by the bank, the country's 12-month rolling deficit totaled $3.3 billion. 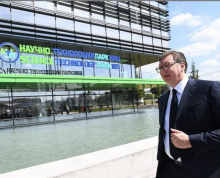 "This is the most important thing we did in Nis. We brought seven factories to Nis, from Johnson Electric to this one today. But STP (Science and Technology Park) is what should make a difference," Vucic pointed out.

The annual growth of Romania's economy in the first quarter of 2020 - 2.4% unadjusted and 2.7% when seasonally adjusted series, was mainly due to the household final consumption expenditure, which volume increased by 3.8%, contributing 2.5% to GDP growth, according to provisional data with the National Institute of Statistics (INS) released on Tuesday.

US President Donald Trump on Monday threatened to deploy the military if states failed to quickly quell the violent protests that have gripped the nation for six days, hours after the brother of George Floyd, a black man who died in police custody, called for peace.

Wielding extraordinary federal authority, President Donald Trump threatened the nation's governors on June 1 that he would deploy the military to states if they did not stamp out violent protests over police brutality that have roiled the nation over the past week.

President Donald Trump on Monday derided the nation's governors as "weak" and demanded tougher crackdowns on protesters in the aftermath of another night of violent protests in dozens of American cities.

I get despondent sometimes at how the mainstream media treat US President Donald Trump, feeling the urge to shout that they're making the same mistakes we made in the summer of 2015 with the bogus referendum.