Hong Kong police fought off protesters with tear gas and batons on Nov. 18 as they tried to break through a police cordon that is trapping hundreds of them on a university campus.

A student at a Hong Kong university who fell during protests over the weekend died on Nov. 8, the first student death in months of anti-government demonstrations in the Chinese-ruled city that is likely to be a trigger for fresh unrest. 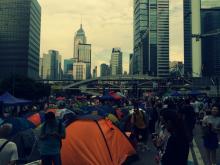 Hong Kong authorities have formally withdrawn the controversial bill that allowed the extradition of citizens to mainland China, fulfilling one of five demands of pro-democracy protesters, BTA reported.

Hong Kong authorities on Oct. 23 withdrew an unpopular extradition bill that sparked months of chaotic protests that have since morphed into a campaign for greater democratic change.

Thousands of protesters regrouped after police fired tear gas at them on Sept. 29 and marched along a thoroughfare in downtown Hong Kong in a second straight day of defiance, sparking fears of more violence ahead of China's National Day.

Hundreds of high school students formed human chains on the streets of Hong Kong today in support of the anti-government protests following a week of clashes in the Chinese-ruled metropolis, Reuters reported.

The metro stations, which were closed yesterday during violent clashes between protesters and police, have reopened today.

The protesters in Hong Kong succeeded. The leader of an autonomous Chinese city has announced that the controversial extradition law will be withdrawn.

Hong Kong pro-democracy protesters threw morning rush hour train travel into chaos on Sept. 1, kicking off another day of potential turmoil after a weekend featuring some of the worst violence in three months of anti-government protests.

That happened during the meeting, at which hundreds of people from Chinese community in this Australian city gathered.