Indian Prime Minister Narendra Modi promised to unite the country on May 23 after a huge election win, with his party on course to increase its majority on a mandate of pursuing business-friendly policies and a hard line on national security. 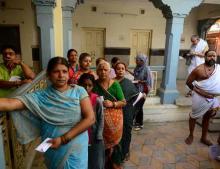 Voting in one of India's most acrimonious elections in decades entered its final day on May 19 as Hindu nationalist Prime Minister Narendra Modi scrambled to hang on to his overall majority.

Indian Prime Minister Narendra Modi capped a whirlwind visit to the UAE on Feb. 11, giving a keynote address as guest of honor at the World Government Summit in Dubai.

Protectionism is gaining ground and globalization is losing its appeal, but India is open for business, Indian Prime Minister Narendra Modi told the World Economic Forum on Jan. 23.

Israeli Prime Minister Benjamin Netanyahu extended an "extraordinary" welcome to his Indian counterpart Narendra Modi when the latter arrived at the Ben Gurion International Airport in Tel Aviv on Tuesday for a three-day "path-breaking" visit to the Jewish nation.

The Indian government on July 1 launched its biggest fiscal reform ever, promising a stronger economy and less corruption, but many businesses said they were confounded by the new single nationwide tax.

Prime Minister Narendra Modi held a special midnight session of parliament to launch the new goods and services tax (GST) which he called "good and simple."

US President Donald Trump's fresh sanctions against Iran have prompted India to review its crucial connectivity project in West Asia - the Chabahar port.

Russian Deputy Prime Minister Dmitry Rogozin, who recently visited India to attend a business summit, has announced that Moscow and New Delhi will reset ties in the coming days.