The main opposition Republican People's Party (CHP) on Jan. 20 welcomed the recently held Berlin summit on Libya, saying the number of countries Turkey cooperates with on regional issues should increase.

The intense anxiety of Turkish President Recep Tayyip Erdogan is not usual for a country leader, argued Greece's Alternate Foreign Minister Miltiadis Varvitsiotis on Tuesday. He also said there is no information on any cooperation between Ankara and Rome on hydrocarbons in the Mediterranean.

Turkish presidential spokesman Ibrahim Kalin described as "significant" the outcome of an international summit on the Libya crisis in Berlin as it led to an agreement for a ceasefire in the strife-torn North African country.

Berlin rejected on Friday a report in German newspaper Bild that Turkish President Recep Tayyip Erdogan had put pressure on Chancellor Angela Merkel not to include a Greek representative in a mini summit on Sunday that will discuss Libya's peace prospects.

Turkey is all set to reach new heights in 2020 by protecting its rights, especially in the Eastern Mediterranean, President Recep Tayyip Erdoğan said on Jan. 16. 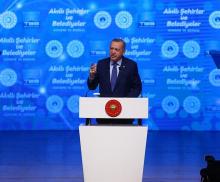 President and ruling Justice and Development Party (AKP) chairman Recep Tayyip Erdoğan has vowed that more mayors from the opposition parties will join the AKP after five district governors joined the ruling party on Jan. 14.

"Five new mayors have joined the AK Party. I believe this figure will increase in the coming weeks," Erdoğan told a meeting with the AKP mayors in Ankara.

The situation in Libya does not seem to be unfolding in the way Greece would like it to. Repeated meetings between officials in Athens and Nicosia are mostly aimed at domestic consumption. Meanwhile, Turkey is obviously trying to consolidate its status in the region, in cooperation with Russia.

Some circles are seeking to use the Armenian allegations over the events of 1915 to create divisions within the Turkish community, the country's communications director said Jan. 14.

Fahrettin Altun's remarks came after a meeting of the High Advisory Board under the leadership of President Recep Tayyip Erdoğan in the capital Ankara.