A sketch that has lain hidden for centuries under the thick layers of paint Rembrandt applied to create "The Night Watch" offers new insight into the Dutch master's creative process, museum officials said on Dec. 8.

Jordi Fauli is the seventh chief architect of Barcelona's iconic Sagrada Familia since Antoni Gaudi began work on the basilica in 1883, and he had been expected to oversee its long-awaited completion.

Milan's central train station plays host from Dec. 3 to a "World of Banksy", featuring reproductions of provocative works by the British street artist in something akin to their original real-world settings.

Excavations carried out in the ancient city of Perre in the southeastern province of Adıyaman have unearthed a 1,700-year-old carpet weaving workshop from the Roman era.

The ancient city of Perre was one of the five largest cities of the Commagene Kingdom and preserved its importance in the Roman period. 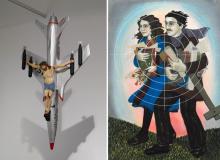 Measuring about 13 inches long and three inches wide, the object was found nailed to a wooden base with silver nails

A 2,700-year-old mosaic believed to belong to a wealthy Roman was unearthed in a house-shaped compartment 10 meters below the ground in Turkey's west.

A rare painting by Frida Kahlo sold in a New York auction house on Nov. 16 for almost $35 million, a record price for a work by the iconic Mexican artist.

At the same sale, a painting by French artist Pierre Soulages also broke a record for his work by reaching $20.2 million dollars.

The Alkazar Movie Theater, one of Beyoğlu's symbolic venues, has reopened its doors with the new name "Hope Alkazar" on the last day of the Beyoğlu Culture Road Festival.

Speaking about the Alkazar Movie Theater and its 100-year-old history at the opening ceremony, Culture and Tourism Deputy Minister Ahmet Misbah Demircan said a very beautiful structure emerged after the restoration.