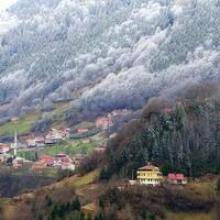 Recent snowfall has left parts of Mount Zigana, which connects eastern Anatolia to the Black Sea, covered with snow, while greenery in the region prevails. (AA Photo) 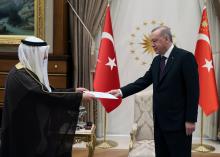 The meeting at the presidential complex was closed to the press.

On a plate hanging on the entrance of a museum, located at the foot of the Ankara Castle in the Turkish capital Ankara, there is the seal of Hittite King IV Tuthalia (1250-1220 B.C). Along with it, "Anatolian Civilizations Museum 1921" is written.

But behind that plate is hidden an extraordinary history of civilization.

The Ezidi community, which escaped from Iraq's Sinjar district and took refuge in Duhok province after ISIL took control of the region, is unable to return to their homes because of oppression by the PKK and the terror group's extensions in the region, Turkey's consul general in Erbil said on April 1.

Turkey wants a "Cyprus that stands on its own feet and creates jobs for its youth," the Turkish vice president said on April 1.

Fuat Oktay, who is on a working visit to Turkish Republic of Northern Cyprus (TRNC), was welcomed by locals at the Ercan International Airport in Lefkoşa.

He met with the residents of Köprülü village.

As the civil war in Syria marks its 10th year, Turkish officials reiterated the calls for "international solidarity and burden-sharing" for displaced Syrians.

The meeting between Recep Tayyip Erdogan and Mohammed bin Abdulrahman al-Thani at the Vahdettin Mansion lasted around an hour and 45 minutes.

Earlier this month, Turkey, Qatar, and Russia announced they plan to make joint efforts for a political solution to end the decade-long conflict in Syria.

A southeastern Turkish city that has been for years overshadowed by terrorism, wants to become a tourist hub with its historical and cultural riches.

After the poor tourist season last year caused by the pandemic, some Balkan countries are hoping to lure tourists from Israel, which has vaccinated much of its population, by recognising its so called "Green Pass" for fully vaccinated people.

More than half of all Israelis have now received both COVID-19 jabs, making the country a world beater in vaccination.