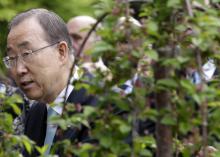 United Nations Secretary-General Ban Ki-moon on Monday expressed alarm over the recent deadly clashes in Macedonia and called on the authorities in Skopje "to fully investigate the events in an objective and transparent manner".

SKOPJE - Five of the 40 armed people who have attacked a border post in the village of Gosince in northern Macedonia have been identified, the Macedonian Alfa television has reported.

Around forty armed men stormed a police department in the Macedonian village of Gosince near the border with Kosovo on Tuesday, taking four police officers hostages.

The attack occurred in the early hours of Tuesday, when the armed men, who spoke Albanian, stormed the building of the department and disarmed the four police officers, who were on duty.