Yalçın Meral, an antique watch enthusiast in the central Anatolian province of Yozgat, reproduces and repairs the missing or damaged pieces of antique pocket watches designed by British and French watchmakers during the 16th-century Ottoman period.

Meral works for weeks or even months to hear the "tick-tock" sound from antique watches, which are over 4 centuries old.

The epilogue of the protest was mass arrests and prison sentences for protesters who disturbed public order and peace. 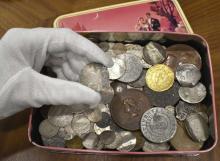 One of the first coins minted in Colonial New England, which was recently found among other coins in a candy tin, has sold at auction for more than $350,000, more than it was expected to get, the auctioneer said on Nov. 26.

A new exhibition opens in London today, exploring the life, music and legacy of British singer-songwriter Amy Winehouse, a decade after her death aged just 27.

"The Beatles: Get Back," the eagerly awaited new Disney+ documentary from Peter Jackson, aims to dispel persistent myths about the Fab Four's breakup, offering a more positive take on their final months as a band.

More than 150 galleries presented some 500 artists on Nov. 19 at the first contemporary art fair in Rome, a city better known for its ruins and works by masters long passed.

"We wanted to fill a void," fair director Alessandro Nicosia told AFP, indirectly acknowledging the absence for many years of a more avant-garde artistic and cultural movement in the Eternal City.

Perparim Rama's victory in Pristina's mayoral election caps a remarkable homecoming for the London-based architect. But can he apply his expertise to remedy the city's unruly expansion?