The iconic tapestry of Pablo Picasso's "Guernica" is gone from its place of honor outside the U.N. Security Council in the United Nations headquarters complex overlooking New York's East River.

The painting "Guernica," considered one of Picasso's masterpieces and by many art critics as perhaps the most powerful anti-war painting in history, hangs in the Museo Reina Sofia in Madrid.

He said that we are working hard on that issue, and that based on what he sees today, especially after the newly elected U.S. President, Joseph Biden, took office, there will be pressure only on Serbia again.

In the garage where he sought shelter from bombs in his native Lebanon, Ara Malikian discovered the power of music.

The meeting of the Romanian and Spanish governments will most likely take place in June this year, Spanish Foreign Minister Arancha González Laya said on Wednesday, stressing that the agenda of the meeting will be "largely dedicated to the people", context in which she voiced her appreciation for the contribution of the Romanian community to the society in her country.

An 85-year-old woman and one Bulgarian was among three people killed today as a gas explosion blew apart a seven-storey block in Madrid while a repairman worked on the boiler.

The top four floors of the building, belonging to the Catholic Church, were obliterated at around 3pm, leaving the centre of the Spanish capital looking like a war zone. 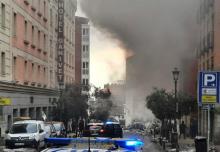 One building was destroyed and the surrounding buildings were damaged. The explosion happened not far from the tourist attraction Puerta de Toledo, the famous city gate.
Unofficially, it is possible that there was an accident due to a gas leak. Allegations surfaced that the occupants felt gas hours before the explosion.

At least three people were killed on Jan. 20 when a huge explosion ripped through a building in Madrid, with officials confirming it was caused by a gas leak.

Images from the scene showed the walls on the top four or five stories of the residential building in the heart of the La Latina neighborhood had been blown out, with vast quantities of debris spreading far and wide.

The Philomena storm, which left Madrid paralyzed by snow last week, is sweeping across the Mediterranean, has already covered the eastern parts of the Balkans and continues via Serbia towards Greece and Turkey.
Due to Philomena, Madrid faced with the heaviest snowfall in decades, while the temperature dropped to a record -36 degrees.

People in central Spain are struggling as a deep freeze follows the weekend's heavy snow, leading to treacherous conditions.

Officials have warned the elderly to stay at home.

At least seven people have died due to the weather - the two latest victims were homeless people in Barcelona. 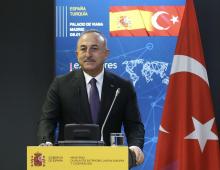 Finding ways to resolve the differences between Turkey and the U.S. is an urgent necessity not only for bilateral relations, but also for transatlantic cooperation, Turkey's top diplomat said on Jan. 8.