the ministry of culture

Karahantepe ancient site in the southeastern province of Şanlıurfa, which is home to more than 250 Neolithic-era T-shaped obelisks similar to the ones in the world-famous Göbeklitepe, is on the way to become the new face of Turkey.

More than 800 guests are expected this evening at the Women in Economy 2020 Gala, an event that rewards business excellence. "The merits of the ladies who have changed the business world in Romania must be acknowledged. With a solid academic background, they succeeded in proving their worth in an extremely complicated environment.

The Bucharest Tribunal has suspended the building permit issued by Bucharest general mayor, Gabriela Firea, for the construction of a four-storey compound on the green space at 45 Kiseleff Blvd., an area known as the Bucharest "Versailles Gardens", independent deputy Nicusor Dan, who is also running for city mayor, announced on Friday.

Following the publication of the girl's personal information, her photographs and health information in some media, the Ministry of Information reacted, as well as the profession. 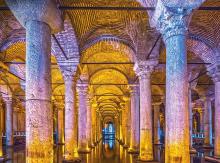 Social media accounts and websites from museums and historical sites managed by the Ministry of Culture and Tourism have been consolidated into one website.

Corneliu Porumboiu's 'La Gomera' is Romania's entry for the best international feature film category at the 2020 Oscars, having received the majority of the votes at the meeting of the Romanian Film Selection Committee, a RollerCoaster release informs on Monday.

Authorities in Montenegro have announced charges against the organisers of two recent concerts over their use of Albanian and Serbian national flags, fuelling debate over the rights of ethnic minorities.

Bulgaria's government on August 7 allocated BGN 100,000 to the Ministry of Culture for the excavations of the ancient city of Heraclea Sintica near Rupite. The state has already provided BGN 1.5 million for excavation and construction of roads to the site. The ancient city is the most visited tourist site in Southwestern Bulgaria, reports BNT.

Organized in collaboration with the Ministry of Culture, the 2019 Paros Festival spans three days and dozens of venues across the port town of Parikia. An exhibition titled "Collecting Stories, Telling Histories" will be on display throughout the event, showcasing archives, artifacts and photographs that detail Paros' history.

Mayor of Tepelena Termet Peci (centre) addressing supporters in the Church of St Nicolas in the village of Lekel. Photo: Termet Peci Facebook

"The use of sacred churches for political activity insults religious and institutional feelings," a statement issued on Monday reads.