One of the most important issues that brings the six opposition parties together is the need to bring democracy to Türkiye, the leader of the Republican People's Party (CHP) has said.

A commission set by six opposition parties has outlined a list of measures they will impose for the safety of the polls in the next elections slated for June 2023.

The newly founded Democracy and Progress Party (DEVA) will run independently in the upcoming parliamentary elections, the party chair, Ali Babacan, has said, stressing that his party will stick to its loyalty to the six-party opposition alliance. 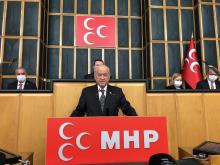 Turkey will be able to overcome economic difficulties, Nationalist Movement Party (MHP) leader Devlet Bahçeli said, urging people to be patient as the country had previously faced such problems in the past.

The leaders of six opposition parties have outlined their joint proposal for a system change, putting a signature to a first agreement of the opposition alliance with vows to promote democracy, human rights, rule of law and efficient checks and balances.

The leaders of six Turkish opposition parties will meet today to announce their joint proposal for the return of the parliamentary system and a road map explaining how it will be implemented if they come to power in the next elections.

A new government has been formed in Turkish Cyprus after a cabinet list was approved by Turkish Cypriot leader Ersin Tatar on Feb. 21.

The National Unity Party (UBP), the Democrat Party (DP) and the Rebirth Party (YDP) will take part in the new coalition government to be led by Prime Minister Faiz Sucuoğlu, also the head of UBP.

The opposition alliance is drawing a new road map for Turkey, with democracy and justice being a common goal, the leader of the Republican People's Party (CHP) has said.