In 2019, John Kiriakou, a former CIA analyst and case officer jailed for revealing to a reporter the use of waterboarding in the interrogation of al-Qaeda suspects, sought a pardon from President Donald Trump. This had been revealed then by the Washington Times. 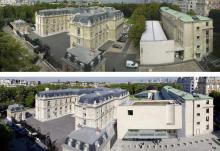 The 21st century's second decade was marked by numerous disputes concerning previous achievements. After the dramatic reduction of world poverty, the development of movement in several sectors and the rapid evolution of technology, the post-Cold War model began to decline. The recent globalization indicators are already showing a downward trend.

Turkey will renew its offer to form a joint working group with the United States to look into the technical aspects of its acquisition of the Russian S-400 defence systems it acquired, once President-elect Joe Biden takes office, Foreign Minister Mevlut Cavusoglu was cited as saying on Friday.

Ljubljana – An informal coalition of centre-left opposition parties has filed a motion of no confidence in the Janez Janša government with the backing of 42 of the 90 deputies of the National Assembly. The crux of their argument is the government’s failure to cope with the coronavirus epidemic.

By the time Joe Biden is sworn in as the 46th U.S. president Wednesday, his scandal-tainted predecessor Donald Trump will already be far away, having helicoptered out of the White House a last time earlier that morning, an official said on Jan. 15.

Trump will be the first president in a century and a half to snub the inauguration of his successor.

Donald Trump's departure from the helm of the United States removes a negative piece from the puzzle of Greek-Turkish relations. The outgoing president often flaunted his friendship with his Turkish counterpart, and many say it was a quid pro quo relationship based on business interests. Regardless, Recep Tayyip Erdogan always found a receptive ear at Trump's White House.

Representative Greene announced her plan on Twitter, as Independent reported.
While 10 Republicans voted to support the impeachment article, congresswoman Greene was amongst the 197 House representatives, who defended President Donald Trump. 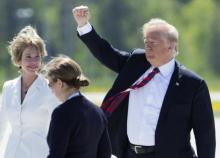 This is how the assistant at the Faculty of Political Sciences, Stevan Nedeljkovi, explains the decision of the House of Representatives of the U.S. Congress to recall President Trump, followed by a debate and a vote in the Senate.

Twitter CEO Jack Dorsey defended his company's ban of President Donald Trump in a philosophical Twitter thread that is his first public statement on the subject.