A new exhibition opens in London today, exploring the life, music and legacy of British singer-songwriter Amy Winehouse, a decade after her death aged just 27.

The dress singer Amy Winehouse wore for her final performance sold on Nov. 7 for $243,200, 16 times its estimated value, as part of a trove of memorabilia from the late diva's life auctioned in California.

Winehouse wore the green and black bamboo print dress at a concert in Belgrade in 2011.

A month later, on July 23, she died from acute alcohol poisoning. She was 27.

Amy Winehouse may still be best known for her line: "They tried to make me go to rehab. But I said no, no, no."

But 10 years after the British singer's death at 27, her family and friends say it is time to stop defining her by her well-documented struggles with addiction and destructive relationships. 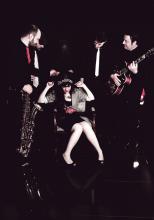 On April, 01 the Serbian band Amy's House Live Band will present for the first time in Bulgaria their unique tribute show, inspired by the legendary Amy Winehouse. Favourite songs like Back to Black, You know I'm no Good and Rehab will sound on the stage of club *Mixtape5 for all fans of the soul queen.

A new documentary on the life of late British singer Amy Winehouse shows the six-time Grammy-Award winner in her younger days discussing her misgivings about fame, a preview of the trailer showed on April 2.

Winehouse died from alcohol poisoning nearly four years ago at her London home at the age of 27 after struggling with drinking and drug problems throughout much of her career.