Member states of the Council of Europe

During his visit Plevneliev will receive the European Regional Integration award of the Federal Province of Lower Austria and the Danube University Krems.

According to the latest survey of Alpha Research, the majority of Bulgarians - 61 % oppose the imposition of new sanctions against Russia, while 39 % support their extension.

The survey, which was released on Monday, examines the social attitudes of Bulgarians on the country's foreign policy, the conflict between Russia and Ukraine and the national security.

Mitov and Dacic agreed that a joint sitting of the governments of Bulgaria and Serbia had to be held by end-2015.

Speaking during an official visit to Serbia, Bulgaria's President Rosen Plevneliev stated that regional neighborhood was the most precious value in the Balkan countries.

Plevneliev took part in a forum attended by over 50 business representatives from the two countries.

BELGRADE - President of the Serbian Chamber of Commerce (PKS) Marko Cadez said on Friday that Bulgaria is a partner of Serbia in economic and political terms, but that there is still room for improvement in cooperation. 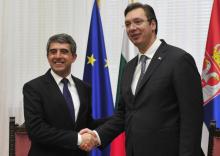 BELGRADE -- Prime Minister Aleksandar Vucic said on Thursday that the Bulgarian national minority in Serbia represents the bridge between the two countries.

He made the statement during the talks with Bulgarian President Rosen Plevneliev, who earlier in the day also met with his Serbian counterpart Tomislav Nikolic.

As part of the celebrations for its 10-year anniversary, the Centre of Hellenic Culture in Moscow has organized a week dedicated to Greek culture, from March 19-25, with the aim of promoting Greece to the Russian audience.

The events will be held at the Meridian cultural venue and will focus on the important historic landmarks in the relationship between the two countries.

BELGRADE - Serbian Prime Minister Aleksandar Vucic said on Thursday in the talks with Bulgarian President Rosen Plevneliev that the Bulgarian national minority in Serbia represents the bridge between the two countries.

BELGRADE -- Serbian President Tomislav Nikolic said on Thursday it was "very important to Serbia to maintain the maximum level of unimpeded cooperation with Bulgaria."

BELGRADE - The Tourism Organization of Serbia (TOS) will showcase the country's offer at the fair in Zagreb from March 13 to 15.

Visitors will have an opportunity to learn first-hand the richness and diversity of Serbia's entire tourist offer - its natural beauties, cities, music festivals.