Motion of no confidence

The latter option would mirror previous practice established after successful no-confidence votes in 2010, 2014 and 2017. However, one obstacle to this is the coronavirus pandemic.

The Kosovo government led by Albin Kurti was overthrown on Wednesday by a no-confidence motion initiated by the junior party in the governing coalition, the Democratic League of Kosovo, LDK.

The presidency of the Kosovo parliament will meet on Tuesday to consider the no-confidence motion against the government of Albin Kurti initiated by the junior partner in his coalition government, the Democratic League of Kosovo, LDK - which looks increasingly likely to pass.

The ruling came as parliament prepared for a vote, which has now been suspended, in which legislators should have decided whether the centre-right politician would take office.

The government Tunisian Prime Minister-designate Habib Jemli fell on Jan. 10 after a no-confidence vote in parliament.

The Jemli government failed to get a vote of confidence from the Tunisian assembly, Rachid Ghannouchi, the parliament speaker announced following the vote. 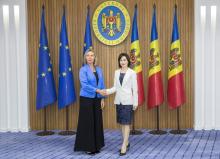 Prime Minister Maia Sandu's cabinet was ousted on Tuesday when it lost a no-confidence motion by 101 to 63 votes, only five months after it came to office.

It was defeated by the combined votes of the pro-Russian Socialist Party, PSRM, and the Democratic Party which was led until recently by the oligarch Vlad Plahotniuc.

The Government proposed by Prime Minister-designate Ludovic Orban on Monday won Parliament's confidence vote at a plenary sitting. Out of the total 465 MPs in attendance, 240 cast a ballot, according to Senator Silvia Dinica. "Parliament extends its confidence in the government by a majority vote of the lawmakers requiring at least 233 ayes.

Prime Minister Viorica Dancila has reiterated that the censure motion against her cabinet will fail, as hopefully there are enough "responsible people" in Parliament. "The number of signatures does not always match the number of votes.

The Romanian centre-right opposition will attempt once more to oust the Social Democratic-led government next Thursday, when a fresh motion of no-confidence is set to be voted on in a joint session of the two chambers of parliament.

Unlike past motions that failed to rally enough MPs, this move to remove Prime Minister Viorica Dancila stands better chances.