The Macedonain Foreign Affairs Ministry and the VMRO-DPMNE party issued a protest to Bulgaria after the latest nationalist outburst from Bulgarian member of the European Parliament Angel Dzhambazki. Dzhambazki, who is part of the VMRO-BND party which is in Prime Minister Borisov's coalition, threatened Macedonia with a "dreadful end" if it "continues to reject its Bulgarian character". 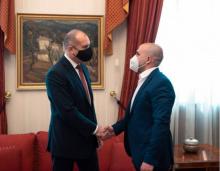 Bulgarian President Rumen Radev supported the initiative "Send a Bulgarian book to Macedonia" by donating novels by the famous Bulgarian writer, Dimitar Talev, who was born in the city of Prilep (today in Republic of North Macedonia).

Two days before it was scheduled to start, North Macedonia's governing and opposition parties have agreed to postpone the long-awaited census for five months so that census takers and the wider population can get vaccinated first.

Sofia - Skopje relations have entered a new crisis following the publication last week of a report by the International Institute for the Middle East and Balkan Studies (IFIMES), a Slovenian think tank.

Addressing the European Parliament (EP) on Thursday, European Commissioner for Neighbourhood and Enlargement Oliver Varhelyi encouraged Skopje and Sofia to redouble their efforts to find a mutually acceptable solution to the pending bilateral issues. The EP is expected to vote later in the day on the progress reports on North Macedonia and three other Western Balkan countries.

Tobias Zech, a legislator from the centre-right Christian Social Union, CSU, the ruling party in Bavaria and sister party to Chancellor Angela Merkel's CDU, has quit after Germany's Spiegel revealed that he lobbied for Nikola Gruevski's ousted authoritarian regime in North Macedonia in 2016.

Kosovo's potential Prime Minister, Albin Kurti, has used his growing popularity in the wider Albanian diaspora to call on ethnic Albanians from North Macedonia to take part in that country's census.

In snap elections in Kosovo on February 14, Kurti's Vetevendosje party received the support of more than 75 per cent of the more than 50,000 votes that Kosovars living abroad cast.

North Macedonian law enforcement has placed the businessman Orce Kamcev in 30 days' detention in Shutka prison near Skopje, on the request of the Organised Crime Prosecution, which said there was a risk he might flee the country.

The prosecution on Sunday said it requested his detention after receiving "info from the National Security Agency that he might be preparing an escape".

The head of the Anti-Corruption Commission in North Macedonia, Biljana Ivanovska, on Friday said that before launching an official inquiry into the country's COVID vaccine troubles, they had "started collecting information on the affair" in which Health Minister Venko Filipce is accused of trying to procure Chinese vaccines through a questionable intermediary firm.

NATO on Wednesday declined to comment on claims by North Macedonia's leader that the country's NATO commitments had got in the way of timely purchases of COVID vaccines.