He added that he expected an exchange of arguments, in a civilized tone.
Asked what he expects from that meeting, Vucic says it will be an interesting meeting as well as there will be many leaders from Europe and the world.
Vucic notes that Thaci is still the legal president of temporary institutions in Pristina and adds:

Interim PSD (Social Democratic Party) leader Marcel Ciolacu on Thursday stated in Slatina that the PSD will file a censure motion together with the UDMR (Hungarian Democratic Union of Romania), after the government announced it would take responsibility for the election of mayors in two rounds.

Koula Armoutidou (l), the mother of 21-year-old Eleni Topaloudi who was raped and murdered on Rhodes last year, is seen being comforted Monday by Magda Fyssa, the mother of Pavlos Fyssas, a 34-year-old rapper who was slain by a member of the neo-Nazi Golden Dawn party in 2013.

When the populist PiS first gained power in 2015, it was able to pass controversial justice reforms literally overnight. But the new balance of power means it will have to sweat a bit more to pursue a strategy widely condemned as an attack on judicial independence.

The main opposition Republican People's Party (CHP) has called for establishing a research commission in parliament to uncover the political establishment of FETÖ, the group that orchestrated the 2016 defeated coup in Turkey.

The CHP, which said the 15 July Coup Investigation Commission established earlier in parliament was inadequate, took action to establish a new commission. 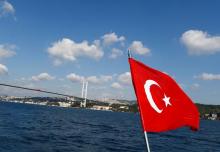 Nationalist Movement Party (MHP) leader Devlet Bahçeli stressed on Jan. 12 that Turkey should pursue pro-active diplomacy in the region as tensions escalate on many fronts.

The Office for the Protection of the Constitution and Counterterrorism, a police agency tasked with protecting the constitutional organs of the Austrian state, has allocated three agents to shadow Justice Minister Alma Zadic, citing the risk of a planned attack on her, the Kronen Zeitung newspaper reported.

Local and legislative elections will reveal whether the now governing Liberals can consolidate their mandate - and whether the tarnished Social Democrats can recover lost momentum.