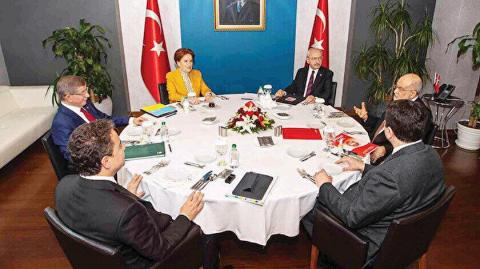 "As we have emphasized many times on the presidential candidacy, we will nominate a conciliatory, liberal and meritorious candidate who has internalized democratic values, embraces the entire nation and adopts the principles of political morality," a joint statement read.

The statement on their presidential nominee comes after a recent debate sparked after the DP leader tweeted that the candidate must not be a person that was "a partner in responsibility during the 20-year ruling Justice and Development Party (AKP) term."

The local media reported that Davutoğlu was dissapointed with the statement, which followed a visit by Uysal to the leader of Future Party last week.

In their statement, the leaders reaffirmed their commitment to the "Strengthened Parliamentary System" that will "restore the prestige of parliament."

"In this context, we reviewed our efforts to deepen our cooperation against the political engineering that the government wants to do with the new election law," the statement said, adding that they also exchanged views on the current economic difficulties.

The leaders said they discussed the duties and methods of the working groups on the constitutional and legal framework of the...