Those earlier arguments, based on Prague's plan to play a major role in distributing gas from Russia's Nord Stream 2 pipeline, derailed the project to build the Stork II gas link between the two countries in 2020. 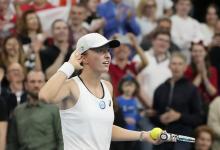 New No. 1 Iga Swiatek powered Poland into the Billie Jean King Cup Finals for the first time and they were joined by other newcomers Italy and Kazakhstan.

The United States and Ukraine were 2-2 and playing a decisive doubles in their qualifier in Asheville.

In Britain, thousands of people gathered again for demonstrations and marches in support of Ukraine in various cities across the country.

The Hungarian government is particularly worried about the security of the 130,000-strong Hungarian minority living in the Zakarpattia Oblast (Transcarpathian region) of southwest Ukraine.

I don't know whether that stands true for all the history of the world, but I know that 20th-century Europe's often painful history can be observed through the lens of borders.

On the initial reading of the draft of the new rules, these 10 states found that wish granted. But on going through the small print, the new Czech government discovered that gas would only be classed as green until 2030 and nuclear for just the next 23 years.

The winner of the October 8th and 9th parliamentary elections in the Czech Republic was the opposition alliance "Together", which includes the Civil Democratic Party, the Christian Democrats and the Tradition, Responsibility, Prosperity 09 party, according to the final results after counting 100% of the ballots.