A German academic who had been sailing in the Aegean Sea on his catamaran as the pandemic made its way into Europe and who eventually got stranded in the middle of the Aegean Sea, because both Turkey and Greece closed their borders, is now back home. 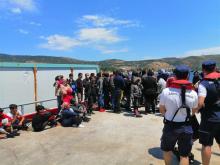 Turkish Coast Guard teams rescued at least 72 asylum seekers on May 25 from four boats in the Aegean Sea.

Acting on a tip-off, the rescue team reached out to the asylum seekers, who were on board inflatable boats that were forced into Turkish territorial waters by the Greek Coast Guard.

Turkey on May 20 slammed a statement by Margaritis Schinas, European Commission Vice President for Promoting Our European Way of Life, about the country and migration, saying it was more like the political discourses of members of the Greek government than of a European Union official.

The tourism ministers of Turkey and Greece have discussed possible joint efforts to promote the Aegean Sea as a holiday destination at a time when the coronavirus hits the tourism industry globally.

The National Organization for Public Health (EODY) has teamed up with a nongovernment organization dedicated to improving living conditions on Greece's remote islands to bring coronavirus testing to communities that are cut off from medical facilities.

False killer whales, generally found in tropical and temperate waters of major oceans, have been spotted in northern Aegean Sea for the first time in 25 years.
Eight false killer whales floating in open sea some 6 miles away from Imbros island were recorded by a fisherman.

Turkey on May 4 denied allegations that Turkish forces had harassed a helicopter carrying Greek Defense Minister Nikolaos Panagiotopoulos over the Aegean Sea.

"Any harassment of the helicopter carrying Greece's national defense minister on board is out of the question," said Turkish Foreign Ministry spokesman Hami Aksoy in a statement.

A Turkish coast guard team has rescued a boat carrying 62 asylum seekers in the Aegean Sea, which was turned away from the Greek side, officials said on May 1.

The Greek coast guard confiscated the fuel and broke the engine before pushing it to Turkish waters, officials from Interior Ministry told Anadolu

Two asylum-seekers have been hospitalized with light injuries after gunshots were fired into Greece's largest migrant camp on the eastern Aegean Sea island of Lesvos, police said Wednesday.

The unknown assailant or assailants evaded arrest, while the two injured migrants were taken to the island's hospital as a precaution, police said. No further detail was provided.

Turkey late on April 21 slammed a statement by the Greek Foreign Ministry concerning the country's maritime jurisdiction areas and drilling activities.
"Greece, with today's statement, once again exhibits its unrealistic perceptions and rights-refusing attitudes regarding the problems in our region," Foreign Ministry spokesperson Hami Aksoy said in a statement.