Washington – Assistant Secretary of State for International Organization Affairs Michele Sison will pay a visit to Vienna, Rome and Ljubljana, the US Department of State announced on Friday, but it has not yet revealed when exactly the visit will take place.

Ljubljana – In an interview with the public broadcaster, President Borut Pahor has talked about the international circumstances, noting that the government is in for deliberation about how to remain an ally in helping Ukraine, while wisely “regulating sanctions so that we can help ourselves”. He also spoke about the long-term prospects of the new cabinet.

"As the war in Ukraine gained momentum, so the political and economic situation in the world is becoming more and more complicated, especially having in mind that Russia's forces are on the rise and that they are getting stronger. 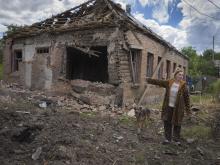 Ukrainian forces prepared on June 24 to retreat from the strategic city of Severodonetsk after weeks of fierce fighting, a setback that could pave the way for Russia to seize a larger swath of eastern Ukraine.

An oil industry meeting with U.S. Energy Secretary Jennifer Granholm to lower gas prices and boost domestic oil supplies was constructive, but did not produce a major breakthrough, administration and industry officials said on June 23.

A Russian administration official was killed in Kherson, Ukraine.
The leaders of the European Union granted Ukraine and Moldova the announced status of official candidates for joining the European bloc, which is a brave geopolitical step that Kyiv and the EU itself welcomed as a "historic moment".

In vain, both Lithuania and the European Union tried to explain to Russia that the blockade, which includes coal, metals, construction materials and advanced technology, is not its independent decision, but the implementation of a joint EU decision on sanctions.