Fahrettin Altun said the PKK is among terror groups that are supported by Greece.

Turkey and Britain share views on many important issues, and joint action would promote these shared interests, as confirmed by a visit by Turkey's defense chief to the U.K., said an official statement on April 9.

A medieval Serbian Orthodox monastery in Kosovo has been included on the list of Europe's most endangered sites, the Europa Nostra organisation announced on Thursday, annoying local politicians who called the decision politically motivated.

Two U.S. warships will sail in the Black Sea, a Turkish Foreign Ministry official said on April 9, stressing that Washington notified Ankara 15 days ago through diplomatic channels in line with the Montreux Convention.

The warships will cross to the Black Sea separately on April 14-15 and then leave the sea on May 4-5, said the official on condition of anonymity. 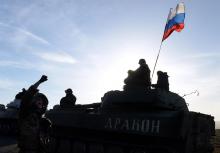 Russia has more troops on Ukraine's eastern border than at any time since 2014, when it annexed Crimea and backed separatist territory seizures, and the United States is concerned by growing "Russian aggressions," the White House said on April 8.

The United States is discussing its concerns with its NATO allies, White House Press Secretary Jen Psaki told a briefing.

President Volodymyr Zelenskiy will visit eastern Ukraine on Thursday to assess the situation in the region following a rise in tension with Russia over a long-running conflict.

Romania and Italy have consistently supported the importance of a strong, inclusive European Union that is closer to its citizens, Romania's Foreign Minister Bogdan Aurescu said on Wednesday. The statement was made at a joint news conference with Italian Foreign Minister Luigi Di Maio during Aurescu's official visit to Rome.

Russia announced the start of mass military drills, ratcheting up tensions with neighboring Ukraine amid Western concerns about the risk of renewed fighting.

More than 4,000 training exercises will be held in military districts across Russia in April, Defense Minister Sergei Shoigu said Tuesday, in comments posted on the ministry's website.