"Russian and Chinese warships organized the first joint patrols in the western part of the Pacific Ocean from October 17 to 23", this was announced by the Russian Ministry of Foreign Affairs.

All those on board of the Be-200 amphibious aircraft that crashed in Turkey were killed, the Russian Defense Ministry told reporters on Saturday.

According to the Russian Defense Ministry, the Be-200ChS aircraft of the Russian Naval Aviation crashed near Adana, Turkey at about 15.10 Moscow Time on Saturday, August 14, 2021. The plane was part of the forces fighting with wildfires in Turkey. 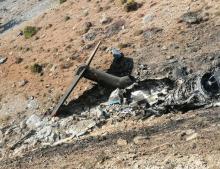 A firefighting plane linked to Turkey's General Directorate of Forestry crashed in the southern province of Kahramanmaraş on Aug. 14, killing all eight people on board.

Contact was lost with the plane which had been rented from Russia to help Turkey's efforts to contain a forest fire in Kahramanmaraş, Governor Ömer Faruk Coşkun told Anadolu Agency.

Erdogan thanked Putin for Russia's allocation of five firefighting aircraft and three more helicopters for supporting Turkey's fight against forest fires across the country, according to a statement.

Russian frigate Admiral Gorshkov has successfully test-fired the Tsirkon hypersonic missile against a surface target at the range of over 350 km and the flight speed reached 7 Mach, the Russian Defense Ministry announced.

"We know in detail what funds and resources have been earmarked from abroad to discredit the domestic vaccine in the world and in Russia," he said.

First groups of the Eastern Military District's special-purpose medical unit arrived in Stepanakert, the capital of the unrecognized Nagorno-Karabakh republic, to provide medical assistance to the local population, the Russian Defense Ministry said on Sunday.

Russia has delivered dozens of armored vehicles to the Khmeimim Air Base that it controls in Syria, the Russian Defense Ministry said on Oct. 26.