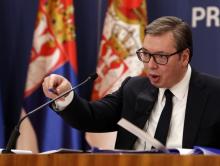 Vui referred to the aggressive rhetoric of the Ukrainian MP. "I wish the Ukrainian people all the best, and the Croats should mind their own business," the president said briefly.

Women in Black said that an unknown man posing as a postal worker entered the building where the peace group's office is located in Belgrade on Tuesday and poured red paint on the entrance door and on the staircase.

First results suggest an ethnic Albanian coalition has secured a seat in Serbia's parliament, ending a marathon battle that began with the April Serbian general elections.

As B92.net has learned, the workers rejected the Prime Minister's proposal to come to the Serbian Government for talks today at 4.30 p.m.
First, they asked for a severance pay of 1.000 euros per year, and today they are asking for 2.000 per year, which is 10 times more than other workers in Serbia receive.

According to him, he has not yet decided whether he will go to the summit, and before making a decision, he will talk with the leaders of the Open Balkans, as well as with members of the Serbian Government.

Kosovo Police announced on Friday that a Serb has been arrested near the western town of Istog/Istok for allegedly committing a war crime against the civilian population.

"After an investigative work from the War Crimes Investigative Unit, police identified and arrested a Serb for war crimes against civilian population in Kosovo during 1998-1999," a police statement said.

The Kosovo government told BIRN that more satellite images are needed of the Stavalj mine near Sjenica in south-west Serbia, where Kosovo Albanian victims of the Kosovo war are suspected to have been buried, in order to reach a definitive conclusion about whether excavation work at the site should continue or stop.

Ljubljana – The NLB bank has send a request to its Serbian subsidiary NLB Komercijalna Banka for a buy-out of the minority shareholders as Slovenia’s largest bank recently reached the relevant threshold after acquiring additional shares. NLB expects that the buy-out will have a neutral impact on the group’s bottom line. 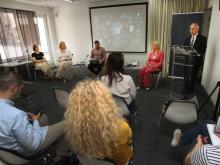 The OSCE ambassador underscored that the problem of surveillance and its impact on media freedoms is not just an issue for the Serbian government, but for European countries as well. Those who control information, control the future.