"We are right, we are strong and we will win. We have won with resistance." Gergerlioglu said defiantly at a press conference held at the HDP headquarters in Ankara on Tuesday night. 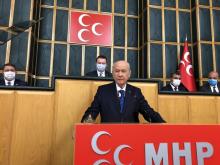 Nationalist Movement Party (MHP) leader Devlet Bahçeli said that the Peoples' Democratic Party (HDP) must be closed forever after the Constitutional Court accepted an indictment for dissolving the political party.

The 843-page indictment, which was prepared by Bekir Şahin, the chief prosecutor of the Supreme Court of Appeals, also demands that 451 party members be banned from politics.

Turkey's Constitutional Court will conduct its first examination on June 21 in a case filed for the closure of the Peoples' Democratic Party (HDP).

A Constitutional Court rapporteur will complete his examination of the indictment and present it to the delegation, and at the meeting to be held on June 21, they will decide whether the indictment will be accepted or not.

The head of Turkey's Constitutional Court on March 19 appointed a rapporteur on a lawsuit filed by the Supreme Court of Appeals' chief prosecutor for the closure of the Peoples' Democratic Party (HDP).

According to information received by Anadolu Agency, the examining process of the indictment has started and a rapporteur was appointed.

Turkey's Constitutional Court once again ruled on Jan. 21 that the rights of former main opposition Republican People's Party (CHP) lawmaker Enis Berberoğlu were breached, noting that the verdict given earlier has not been implemented yet.

CHP Group Deputy Chair Engin Altay has called on high and local courts to meet the demand of the Constitutional Court.