German Chancellor Angela Merkel on March 2 called for a "protected zone" in northwestern Syria for hundreds of thousands of civilians fleeing the attacks of the Bashar al-Assad regime.

Speaking at a news conference in the capital Berlin, Merkel expressed grave concern over escalating tensions in Idlib, a northwestern Syrian province, just across the Turkish border. 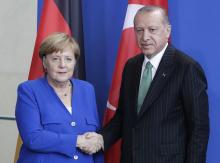 Turkish President Recep Tayyip Erdoğan spoke by phone with his German counterpart about recent developments including Idlib and the refugee crises, the Communications Directorate said early on March 3.

German Chancellor Angela Merkel said on Monday she understood that Turkish President Recep Tayyip Erdogan expected more help from Europe to deal with the refugee crisis, but added he should not use refugees to express his dissatisfaction. 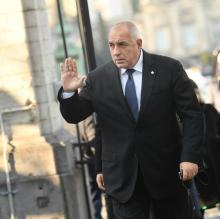 Prime Minister Boyko Borissov will meet with Turkish President Recep Erdogan in Ankara. The focus of their conversation will be on the situation in Syria and the situation with migrants.

The two leaders will discuss actions that will help tackle the crisis and curb migrant pressure in the region.

Turkey's President Recep Tayyip Erdogan said in Istanbul on Saturday that 18,000 migrants had crossed the border, without providing evidence, adding that the number could rise to 25,000-30,000 on Saturday.

Mired in battles in Idlib where over 30 Turkish troops were killed by Russian-backed Syrian, at loggerheads with Russia and asking US President Donald Trump for assistance on the ground, Turkish President Recep Tayyip Erdogan put the Greek government in a tailspin and a virtual defensive war footing by announcing that he will no longer abide by the EU-Turkey Statement of March 2016 which severe

Prime Minister Kyriakos Mitsotakis on Friday briefed key European leaders about the steps Greece has taken to guard its borders more effectively as hundreds of refugees and migrants were trying to make the crossing from Turkey into the European Union.

European countries close to Turkey were on the alert on Friday after Ankara said it was opening its borders for migrants and refugees who want to leave the country and cross into Europe.

Since Ankara announced the decision, thousands of mainly Middle Eastern refugees have flocked to cities close to the border with Bulgaria and Greece as well as to ports on the Aegean Sea.

Greek Prime Minister Kyriakos Mitsotakis discussed the situation in Turkey and the movement of migrants towards Greek borders during a call with German Chancellor Angela Merkel, the prime minister's office said.