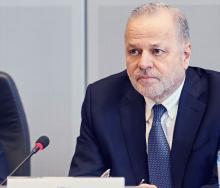 The day after the pandemic and the dynamic rebound that will follow, but also the new productive model that the country needs which should combine innovation, production, services and skills, were mentioned by Evangelos Mytilineos in an interview with Kathimerini.

Athens-listed Mytilineos SA said on Thursday its 2020 operating profits remained unchanged at 2019 levels, despite the pandemic.

The coronavirus crisis should herald a change in Greece's production model, prompting a shift away from its tourism-dependent economy, the ongoing Delphi Economic Forum was told on Thursday.

The Athens-based E-Kyklos think tank is organizing an online public debate on Wednesday evening titled "The Pandemic and the Strength of the Greek Economy: The Day After," featuring former deputy prime minister Evangelos Venizelos, the chairman and chief executive officer of Mytilineos, Evangelos Mytilineos, Eurobank's CEO Fokion Karavias, the president of the Greek Tourism Confederation, Yiann

Mytilineos group head Evangelos Mytilineos has expressed concern over the future of Public Power Corporation, suggesting his company could withdraw from the tender for PPC's lignite-powered units.

Greek industrial group Mytilineos expects sales to top 2.2 billion euros next year, from 1.5 billion euros this year, thanks to its growing alumina business and new projects in Libya and Ghana, its chairman said on Thursday.

The Supreme Court on Tuesday refuted a decision last week by an Athens appeals council that indicted businessman Evangelos Mytilineos and a former CEO of Public Power Corporation, Stergios Nezis, on bribery and money laundering charges respectively, in a case that dates from 2003.

The case will be re-examined by the Supreme Court.

An Athens appeals council on Friday indicted businessman Evangelos Mytilineos and a former CEO of Public Power Corporation, Stergios Nezis, on bribery and money laundering charges respectively, in a case that dates from 2003.

Mytilineos group chairman Evangelos Mytilineos said on Thursday that his main concerns are developments in the electricity market and the major investment it announced a few days ago regarding the construction of a new natural gas-powered plant.