Examples are legion. When Der Spiegel reported that the far-right Alternative for Deutschland had misappropriated funds, the party's supporters could not have cared less.

Ensuring equal opportunities for women and men on the labor market is an important objective of the Romanian Presidency at the EU Council, said Deputy Prime Minister Ana Birchall, who represented the Romanian Government at the World Economic Forum in Davos, which took place between 22 and 25 January, being an annual event that gathers political leaders, diplomats, economists, representatives of

Thirteen miners died and 10 were injured after a fire caused by burning methane erupted in a black coal mine in the east of the Czech Republic, a spokesman said Friday, reported AFP

"In total we have 13 dead miners, 11 Polish and two Czech," Ivo Celechovsky, spokesman for the OKD mining company, told AFP.

Premier Viorica Dancila on Thursday had a phone talk with her Polish counterpart Mateusz Morawiecki, reaffirming on the occasion Romania&#39;s full commitment to ensuring a successful Presidency of the EU Council, the government said in a release.

Although approved in July by all 193 UN members, except the US, several countries from Central and Eastern Europe are now stepping back.

The first Romanian-Polish intergovernmental meeting was held in Warsaw on Friday, reaching agreement on defence co-operation, intensified political dialogue at all levels in preparation of the Romanian presidency of the Council of the European Union, as well as on holding a Romanian-Polish business forum.

Prime Minister Viorica Dancila was welcomed on Friday, within an official ceremony held at the Belweder Palace in Warsaw, by Polish Prime Minister Mateusz Morawiecki.

After the official photo is taken, the two Prime Ministers are to carry out talks. In parallel, bilateral meetings among the relevant ministers are to take place.

German Chancellor Angela Merkel traveled to Warsaw on Monday for talks with Polish leaders aimed at improving relations which have been strained by disagreements on rule of law, immigration and refugee policy, and Poland's new Holocaust law, as well as a new gas pipeline. 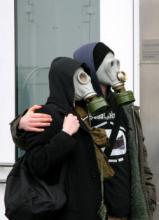