Israel's ambassador to Romania David Saranga said on Tuesday that during the coronavirus pandemic domestic violence had risen and showed that anyone experiencing it "must speak up" and take action. He made a donation consisting of household appliances and non-perishable food to the Casa Agar Maternal Centre of the Touched Romania Association. 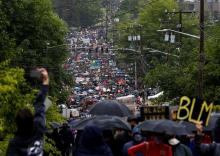 Minneapolis leaders voted unanimously on June 12 to disband the U.S. city's police force and replace it with a "community" safety department, a reaction to transformational changes demanded in mass protests against racial injustice.

Some three decades after the fall of communist systems, police brutality - linked to political, racial and other issues - remains a problem across the region.

Authorities believe they have identified the main suspect in the vitriol attack last month on a 34-year-old woman in Kallithea, southern Athens, police sources said Tuesday.

The breakthrough came after officers examined footage from security cameras in the area and phone records from calls made by a number of suspects.

Police clashed with protesters in central Athens on Friday night during a rally over the death of George Floyd, who suffocated on May 25 as a Minneapolis police officer jammed a knee into his neck as he was held down on the street.

A human rights NGO, the Center for Peace Studies, filed a criminal complaint on Friday to the Croatian State Attorney's Office against "unknown perpetrators" from the police, "based on a reasonable doubt of degrading treatment and torture of 33 people and their violent, illegal expulsion from the territory of the Republic of Croatia to Bosnia and Herzegovina".

Five people were arrested and 12 detained in clashes between protesters and police during a march in central Athens over the death of George Floyd, the handcuffed black man who died after being restrained by Minneapolis police on May 25.

The march, organised by leftist groups, started from Syntagma square and reached the US embassy on Wednesday night.

The Family, Labor and Social Services Ministry has taken legal action against four YouTube accounts broadcasting animations with child abuse contents.
The videos posted on the platform have had many views, ranging from 300,000 to 4 million.

Even some well-off people call help lines to seek support from the authorities amid the coronavirus outbreak, said Bilal Yıldız, the head of the social solidarity foundation operating in the Avcılar district, adding that those people's requests are tantamount to the abuse of the system.

Domestic violence against women has been on the rise amid the coronavirus outbreak, but women hesitate to report abuses they suffer to authorities because they live in a confined space with their partners and fear that their partners may notice they're being reported.