The Nobel Peace Prize will be announced just three weeks before world leaders gather for a climate summit that scientists say could determine the future of the planet, one reason why prize watchers say this could be the year of Greta Thunberg.

Jailed Kremlin critic Alexei Navalny was nominated on Monday (27 September) for the European Parliament's annual human rights prize as European Union lawmakers sought to keep the public spotlight on his pro-democracy network, which has been banned in Russia.

Supporters of Russia's ruling party celebrated winning the majority of the vote late Sunday, amid a sweeping crackdown on its critics. 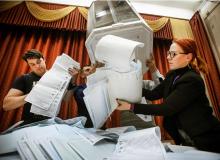 Russia's ruling United Russia party, which supports President Vladimir Putin, retained its parliamentary majority after an election and a sweeping crackdown on its critics, despite losing over a tenth of its support, partial results on Sept. 20 showed.

Russian President Vladimir Putin's party was set on Sept. 19 to retain a majority in parliament on the last day of three-day elections in which most Kremlin critics were barred from running.

Russian President Vladimir Putin has urged Russians to vote in the upcoming parliamentary elections after a lacklustre campaign season.

Polls opened on Friday morning for the three-day election and the first day of the vote was marred by controversy with allies of jailed Kremlin critic Alexei Navalny accusing Google and Apple of removing their "smart voting" app from their platforms.

Jailed Kremlin critic Alexei Navalny has given his first interview from prison, comparing it to a Chinese labor camp and saying he is forced to watch eight hours of state television a day.

This time, the Russian president, who does not normally express emotions during state meetings, gave Merkel a bouquet of pink flowers.
Although the topics of conversation are difficult, especially due to the crisis in Afghanistan, which affects the whole world, during the meeting, photos of a rather cordial conversation between the two statesmen were taken.