The increase in the number of cases of SARS-CoV-2 infection will continue in the coming period, and over 92 pct of deaths were recorded in unvaccinated persons, announced, on Tuesday, the the president of Romania's National COVID-19 Vaccination Coordination Committee (CNCAV), military doctor Valeriu Gheorghita.

The European Medicines Agency said Thursday a coronavirus variant known as "Mu" could be cause for concern, although there is no data yet to show it will overtake the dominant Delta strain, AFP reported. Mu, which was first identified in Colombia in January and is known scientifically as B.1.621, was classified earlier this month as a "variant of interest" by the WHO. 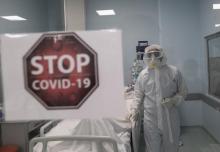 He did that during a telephone conversation with US Secretary of State Antony Blinken.
"China is strongly protesting the recent publication of a so-called report on the investigation of the origin of the coronavirus compiled by the U.S. intelligence services," Wang Yi said, according to the official website of the Chinese Ministry of Foreign Affairs.

U.S. intelligence agencies remain divided on the origins of the coronavirus but believe China's leaders did not know about the virus before the start of the global pandemic, according to results released on Aug. 27 of a review ordered by President Joe Biden.

The Strategic Communication Group (GCS) informs Friday that, in the last 24 hours, 19 deaths have been reported in patients infected with the SARS-CoV-2 virus. According to GCS, the patients who died of COVID-19 were 11 men and 8 women.

The Strategic Communication Group (GCS) informs that, in the last 24 hours, 13 deaths have been reported in patients infected with the SARS-CoV-2 virus. According to GCS, the patients who died of COVID-19 were 5 men and 8 women.

The Caretaker Minister of Health Dr. Stoycho Katsarov and the management of the associations of hospitals in the country discussed the measures that should be taken in connection with the expected increase in the incidence of COVID-19 in the country, the Ministry of Health announced.

The National Institute of Public Health (INSP) informs on Tuesday that until August 15, 2,088 cases were confirmed with strains of SARS-CoV-2 which cause concern, of which 1,695 with the Alpha strain, 11 with Beta, 23 with Gamma and 359 cases of the Delta strain. According to the INSP, until August 15, the confirmation rate of SARS-CoV-2 variants of concern (VOC) was 77%.

Bucharest, Aug 15 /Agerpres/ - As many as 323 new cases of people infected with SARS-CoV-2 in Romania were recorded in the last 24 hours following 27,134 tests nationwide, the Strategic Communication Group (GCS), the official novel coronavirus communication task force, reported on Sunday. These are cases of patients that have not previously tested positive.