Twitter banned President Donald Trump's account on Jan. 8, citing "the risk of further incitement of violence" following the deadly insurrection at the U.S. Capitol on Wednesday.

Republicans say that Trump has done nothing to be blamed for 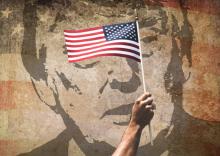 Mr Manafort was convicted in 2018 in an investigation into alleged Russian meddling in the 2016 US election.

Mr Trump had previously commuted the prison sentence of Mr Stone, who was convicted of lying to Congress.

President Donald Trump pardoned more than two dozen people, including former campaign chairman Paul Manafort and Charles Kushner, the father of his son-in-law, in the latest wave of clemency to benefit longtime associates and supporters.

Wielding extraordinary federal authority, President Donald Trump threatened the nation's governors on June 1 that he would deploy the military to states if they did not stamp out violent protests over police brutality that have roiled the nation over the past week.

President Donald Trump said he will introduce legislation that may scrap or weaken a law that has protected internet companies, including Twitter and Facebook, in an extraordinary attempt to regulate social media platforms where he has been criticized.

President Donald Trump on May 27 threatened social media companies with new regulation or even shuttering a day after Twitter added fact checks to two of his tweets.

The president can't unilaterally regulate or close the companies, which would require action by Congress or the Federal Communications Commission. But that didn't stop Trump from angrily issuing a strong warning.

Namely, Weijia Jiang, a CBS News correspondent from the White House, asked Trump why he sees the current crisis as an international competition, when more than 80.000 Americans have died.
"Maybe that's the question you should ask China," Trump answered a journalist who was born in China and emigrated to the United States at the age of two.