Freedom of expression in Turkey 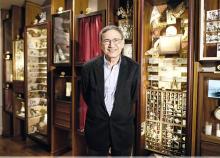 A flowery dress, a single earring, black and white photos, and thousands of cigarette stubs... Inside Istanbul's Museum of Innocence, visitors explore memories of lost love, couples find the privacy to show their affection, and the heartbroken seek understanding for their loss.