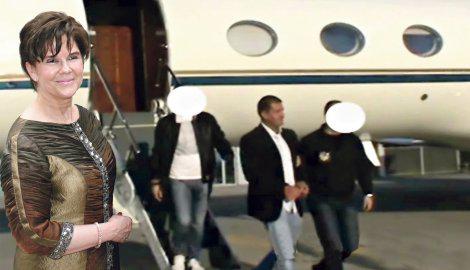 
Former CIA officer of Serbian origin is a director of the company that provided a plane by which suspected drug lord Darko Saric was taken to Podgorica.

That is the plane of a Swiss company from Zurich, the ‘Jet Aviation’ under control of the well known American corporation the ‘General Dynamics’ led by its Director Phebe Novakovic.


The flight by which Saric flew to Podgorica Airport was recorded by the international public data base as ‘unknown’ at the request of the company’s owner. Yesterday the same plane had a flight from Vienna and those data were available in the data base.


According to half-officially presented data Saric was in Venezuela, Columbia, Brazil and the Dominican Republic. There is also information that the CIA was making pressure on the local drug dealing clans and because of that pressure Saric allegedly lost their support.


The media in Montenegro aired a video footage of a plane with Saric onboard landing at Podgorica Airport at 06.30.


- According to the first version a plane with Swiss insignia ‘HB-JKC’ with Saric on board took off in Dubai. It is not to be forgotten that Saric’s wife is in Dubai at the moment. Accidentally or not, businessman Mile Jerkovic, a witness in the process against Saric, is also in that city – the Blic source says.


This source adds that one should not exclude the possibility that Darko Saric came to Podgorica ‘in a quite different way, from a country much closer to Serbia than the Emirates’.