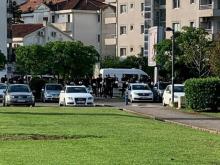 Investment Secretary Mladen Mikijelj was also arrested, as well as Marko Carevic's son and brother.
The police used chemical means, and the windows on the Municipality building were broken.
Municipal officials and citizens gathered early this morning in the premises of the Municipality of Budva, after a dozen vans full of police arrived in Budva.

Israel has reiterated its "full support and strong solidarity" to Greece on the issue of maritime zone delineation, while expressing its "opposition to any attempt to violate" the country's sovereign rights.

Prime Minister Kyriakos Mitsotakis has suggested that he could carry out a reshuffle of his conservative cabinet.
Asked during his visit to Israel Tuesday about media speculation on the issue, Mitsotakis said, "as you know, I make my decisions on the mountain, but now it is summer."
"But you are using the wrong word; the right one is 'corrective moves'," the premier added.

Amid escalating tensions with Turkey in the Eastern Mediterranean and the Aegean, Foreign Minister Nikos Dendias and his French counterpart Jean-Yves Le Drian discussed ways Monday to further enhance cooperation between Athens and Paris.

The government is about to approve the extension of the state of alert by 30 days nationwide under a decision of the National Committee on Emergency Situations (CNSU), Prime Minister Ludovic Orban announced on Tuesday at the beginning of a government meeting.

Greece and Israel pledged on Tuesday to work toward a resumption of bilateral tourism in August if coronavirus precautions permit and discussed shared concerns over Turkey's energy exploration in the eastern Mediterranean.

Israel will allow international flights to resume on August 1, with Greece and Cyprus being the first destinations to be given a green light, the country's Prime Minister Benjamin Netanyahu announced on Tuesday afternoon, following a meeting with Greek counterpart Kyriakos Mitsotakis in Jerusalem.

The Bucharest Court of Appeal (CAB) registered the file sent by the National Council for the Study of Securitate [the communist-era political police] Archives (CNSAS) requesting the establishment of the "quality of Securitate collaborator" of the National Bank of Romania (BNR) Governor, Mugur Isarescu.

Greek Prime Minister Kyriakos Mitsotakis is traveling to Israel today on his first foreign visit since the coronavirus outbreak. The message is clear, and it is being sent out in several directions. After deepening their mutually beneficial relationship (which is not aimed at any third country) for a decade, Greece and Israel are pushing ties to a new level.

Developments in the Eastern Mediterranean, the coronation pandemic, attracting investment and migration were the main issues discussed in a meeting between Foreign Minister Nikos Dendias with French counterpart Jean-Yves le Drian in Paris on Monday.

The two ministers also discussed the European perspective of the Western Balkans.