Pakistani President Arif Alvi has warned that if India continues "atrocities" against Muslims in Jammu and Kashmir, it will cause further revolt and complicate the situation.

The president of the Pakistan-administered Kashmir has praised Turkey, saying the nation has repeatedly raised its voice against international crimes in the conflict zone. 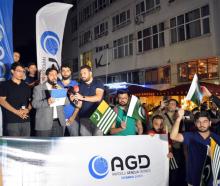 Members of Turkish non-governmental organizations (NGOs) gathered in front of the Indian Embassy in Ankara late on Aug. 23 to express their solidarity with the people of India-administered Jammu and Kashmir.

Pakistan's opposition leader thanked Turkish and Chinese leaders on Aug. 19 for their weigh behind his country in the current crisis of Jammu and Kashmir.

Turkey on Aug. 17 called on the United Nations to play a "more" active role in resolving the Jammu and Kashmir dispute within the framework of the UN resolutions.

Hundreds of people protested an unprecedented security crackdown and clashed with police on Aug. 16 in Indian-controlled Kashmir, as India's government said it was constantly reviewing the situation in the disputed region and the restrictions there will be removed over the next few days.

Troops in India-administered Kashmir allowed Muslims to walk to local mosques alone or in pairs and pray for the Eid al-Adha festival on Aug. 12 during an unprecedented security lockdown that still forced most people in the disputed region to stay indoors on the Islamic holy day.

Turkey's National Assembly speaker on Aug. 9 spoke over the phone with the head of the Pakistan parliament and discussed the situation arising out of India's move to ditch the special status of the disputed Jammu Kashmir region.