Antalya, one of Turkey's most popular holiday destinations on the Mediterranean coast, welcomed a record number of 10 million foreign tourists between Jan. 1 and Aug. 22.

Not only is Turkey continuing its activities in the wider region around Cyprus, but it has declared that it is scaling them up by sending another research vessel to the area. Such a development is not particularly surprising, as Turkey has for many years expressed in several ways the importance of the Eastern Mediterranean in general, and of Cyprus in particular, to its interests.

An Iranian tanker sailed through the Mediterranean toward Greece on Monday after it was released from detention off Gibraltar, and Tehran said that any at US move to seize the vessel again would have "heavy consequences."

At the heart of the most recent geopolitical debate, the eastern Mediterranean Sea is also a hub of a vibrant marine life and biodiversity. To showcase that, Turkey's Marine Research Foundation (TÜDAV) will be opening a photo exhibit at the U.N. headquarters in New York next week.

The number of illegal migrant arrivals on the islands of the eastern Aegean is on the rise compared to last year, according to data released by the European Union border agency, Frontex.
"In the first seven months of this year, the total number of detections in the Eastern Mediterranean was down 6 percent from a year ago to almost 28,200," it said.

Seven Turkish female pilots of one of the world's best-known centers for paragliding offer tourists the opportunity to fly high above the Mediterranean landscape of southwestern Turkey.

Antalya, one of Turkey's most popular tourist attractions in the Mediterranean region, has welcomed a total of 6.9 million foreign tourists between January and July 18, marking a strong 16 percent annual increase. 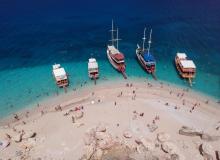 Suluada island in the southern province of Antalya - home to white sand, sparkling sea, Mediterranean monk seals and underwater caves for groupers - welcomes some 2,000 tourists a day during the summer.

Turkey sent a second drilling vessel, Yavuz, to east Mediterranean Sea on June 20 that will begin hydrocarbon explorations off the coast of the Cyprus Island in early July.