The second summit between the leaders of the United States and North Korea, which takes place in the Vietnamese capital Hanoi, has begun.

Asked whether he'd walked back his vow to insist upon the denuclearization of the Korean Peninsula, Trump said he had not.

Questioned later whether he planned to declare an end to the Korean War, he said: "We'll see."

North Korea has an enormous economic potential if the leader of the country, Kim Jong-un, agrees Pyongyang to give up its nuclear weapons. A similar publication on Twitter came out yesterday by US President Donald Trump. In it, he adds that Vietnam can be an example the country should follow, CNBC wrote. 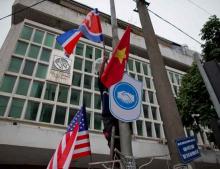 The train station on the Vietnam-China border where Kim Jong Un is expected to arrive by rail was closed to the public and surrounded by armed guards on Feb. 25, days ahead of the North Korean leader's summit with Donald Trump.

There was still some hard work to be done ahead of the upcoming summit between US President Donald Trump and North Korean leader Kim Jong Un, a Washington envoy said Saturday after three days of talks in Pyongyang.

President Trump announced on Tuesday that he will sit down with North Korea's leader, Kim Jong-un, at the end of this month in Vietnam, a country chosen as a neutral location for their second nuclear summit meeting, but one that also has plenty of symbolic significance, reported NY Times.

Turkish foreign minister said on Nov. 17 that he will hold talks with his U.S. counterpart Mike Pompeo on Nov. 20 in Washington to discuss the ties between the two countries "broadly".

International inspectors will be allowed into North Korea's dismantled nuclear testing site, US Secretary of State Mike Pompeo said on Oct. 8, after a meeting with Kim Jong Un in which he said "significant progress" was made towards denuclearisation.

A high-level South Korean delegation will fly to North Korea this week to discuss arrangements for an inter-Korean summit there this month, as relations grow cooler between Washington and Pyongyang.

North Korea transferred 55 cases carrying the remains of soldiers killed in the Korean War, the White House said on July 26, a first step by Pyongyang to implement an agreement made in a landmark summit in June in Singapore.