He beat George Papandreou in the 2nd round

Movement for Change (KINAL) MP Andreas Loverdos has announced that he will support MEP Nikos Androulakis in the second round of voting for the party leadership.

Loverdos in the first round on 5 December came one percentage point short of defeating former PM George Papandreou for second place.

The attention is now turned to the second round of the internal party elections for the election of the president of the Movement for Change (KINAL) party as the alliances, that may be created, will play a decisive role to the election of the leader.

After 16 years in power, Merkel resigned as chancellor. Here is what world leaders have to say about it, synthesized by Deutsche Welle

Barack Obama: "I was lucky to be her friend" 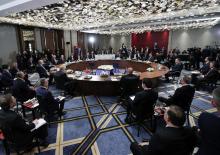 The name of the Cooperation Council of Turkic Speaking States (Turkic Council) has been changed to the Organization of Turkic States, according to a joint declaration of the Council's 8th Summit in Istanbul.

Accompanied by her husband King Willem-Alexander, Maxima was seen in a bold blue gown at a music event in Oslo

A month before the first round of the centre-left Movement for Change (KINAL) party's leadership race, three of the six candidates that are neck and neck are the most likely to make it to the second round, according to a GPO poll published today in the weekend edition of Ta Nea.