North Macedonia's Prime Minister, Oliver Spasovski, on Wednesday moved to axe Labour Minister Rashela Mizrahi from the caretaker government for her refusal to use the country's new official name in a press conference.

The announcement this week of the launch of flights between Belgrade and Pristina operated by Lufthansa caused much more attention than a regular announcement regarding the opening of a new airline route. Not surprising given that it took seeming mediation by US diplomats to facilitate the restoration of flights.

Journalist Tomislav Kezarovski expressed unhappiness on Tuesday at the decision by the prosecution, saying that he had been denied the chance to overturn his conviction at a retrial.

"I want a chance to prove my innocence and be acquitted by the court," Kezarovski told a hearing in Skopje on Tuesday.

North Macedonia's Special Prosecution, rocked by the arrest of head prosecutor Katica Janeva, vowed on Thursday, "Our fight will not stop".

In geopolitical terms, unlike many other Balkan countries, especially Greece, Bulgaria, Serbia or Bosnia and Herzegovina, Russia did not see North Macedonia as part of its immediate strategic interests in the region. 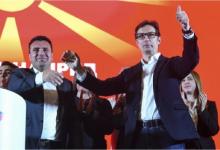 In the presence of four presidents - Bulgaria, Albania, Kosovo and Serbia, and in the absence of the VMRO-DPMNE opposition, the new president of North Macedonia, Stevo Pendarovski, took office. There were also two former presidents of the state - Branko Crvenkovski - who rarely appeared at mass events and the former one - Georgi Ivanov.

Stevo Pendarovski is the new president of the Republic of North Macedonia. He defeated the candidate of the opposition VMRO-DPMNE Gordana Silyanovska-Davkova. Pendarovski was elected by the ruling party of Prime Minister Zoran Zaev Social Democratic Union (SDSM).

Stevo Pendarovski, the presidential candidate backed by North Macedonia's center-left government, won the presidency Sunday in a runoff election with a conservative rival.

North Macedonia held a competitive runoff election Sunday to choose a new president, a vote seen as a test of the center-left government's pro-West policies despite the largely ceremonial duties of the country's head of state.