Bahçeli calls on Akşener to return to MHP 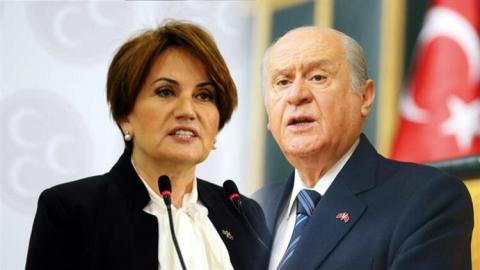 By Akşener visiting the Hagia Sophia Mosque and praying there, the İYİ Party leader dissociated herself from the other members of the opposition Nation's Alliance, Bahçeli told reporters on Aug. 4.

Other partners in the Nation's Alliance, including the Republican People's Party (CHP) and Peoples' Democratic Party (HDP) - which is informally part of the alliance - rejected the change in the status of the Hagia Sophia, Bahçeli said.

"With her last move, the chair of İYİ Party president separated from them. It is a good development for Ms. Meral," Bahçeli said.

"It will be correct and consistent for Ms. Akşener to see that it will not go on like this and that there won't be such an alliance, even if her one foot falls into the pit and she returns home immediately in a very short time," the MHP leader said.

She will be peaceful at "home," he added.

The CHP and İYİ Party's Nation's Alliance supported each other's candidates in the 2019 local election, scoring major successes in Turkey's biggest cities. Before that, the parties had also formed an alliance for the June 24, 2018, presidential and parliamentary elections.

After unsuccessfully challenging Bahçeli for the MHP's leadership, Akşener quit the party in 2016 and announced the establishment of the İYİ Party on Oct. 25, 2017, after which she became party leader.

The MHP entered the June 24 elections as part of the People's Alliance with the AKP.

Protests in Bulgaria, Day 78: Procession to the Headquarters of the Movement for Rights and Freedoms