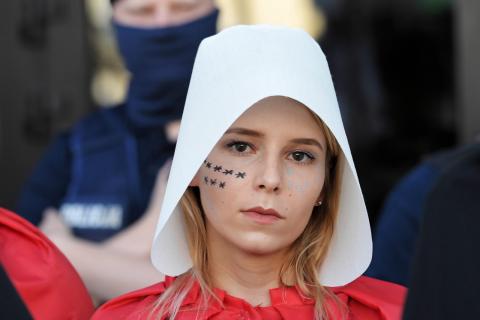 Turkish Instagrammers have been sending black-and-white photos of themselves alongside the hashtag #İstanbulSözleşmesiYaşatır [Istanbul Convention keeps you alive], which refers to the informal name of the Council of Europe Convention on preventing and combating violence against women and domestic violence. This trend was started as a response to constantly seeing black-and-white photos of murdered women in the news. So far this year 185 women have been murdered - a rate which makes Turkey one of the worse countries in the world for femicide.

There had been high hopes that Turkey's woeful record in this regard was finally being addressed when it became the treaty's first signatory at a convention held on May 11, 2011 in the Turkish city that gives the pact its name. Since then, the convention, which is the first legally binding instrument that establishes a set of legal rules to combat violence against women, has now been signed by 45 countries.

Yet almost since its inception, the treaty has come under increasing attack from the growing far-right and nationalistic conservative forces in Central and Southeast Europe, which has meant many countries haven't actually ratified it.

These critics claim, with little foundation, that the treaty is an attack on traditional family values and promotes LGBT ideology. Using disinformation, populist rhetoric, and appeals to Christian and Islamic morality, they have managed to reframe what is essentially a set of guidelines that creates "a comprehensive legal framework and approach to combat violence against women", into a sinister attempt by Western Europeans to foist their overly-liberal policies on reluctant societies further east.

"The organisations that are against the convention are messaging about...