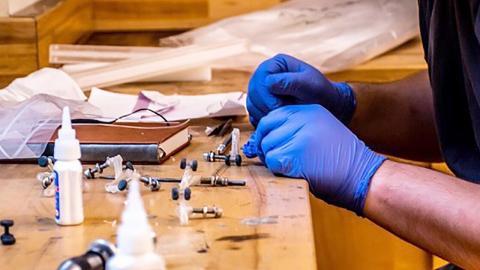 The fiber muscle project, currently underway in the MIT, has been featured on the Science magazine published by the American Association for the Advancement of Science.

"We have developed an implant which can produce enough force to support the spine with the energy taken from body heat, and suitable for the flexibility of the spine," Kanık told Anadolu Agency.

All muscles we have in our bodies work in harmony, and our project is on creating an artificial muscle, inspired by the very complex, functional, and real muscles, he said.

"The artificial muscles are produced using synthetic polymer. Combining materials with certain thermo-mechanical qualities, the purpose is to develop fiber muscles which can flex and detect movement just like human muscles do," he added.

The fibers, originally produced in Turkey by the team with the method of thermal fiber extraction, can be produced in large quantities at a very low cost in a short amount of time.

The team is currently working on a method that would enable the mass production of fibers.

"These fiber muscles are made from biocompatible materials and have a larger capacity of producing energy compared to human muscles. So the project has had a huge impact in the world, and our discoveries have been featured on the cover of the Science magazine," Kanık said.

To fasten the process of using the fiber muscles in various biomechatronic practices, the team founded a company called Kinetik Therapeutics LLC this year.