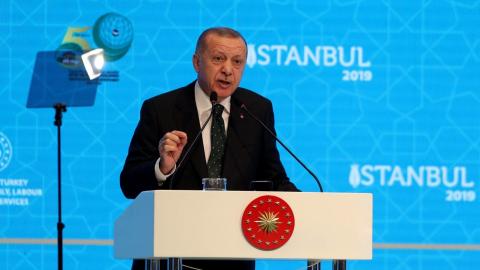 President Recep Tayyip Erdogan's plans to withdraw Turkey from the so-called Istanbul Convention on domestic violence against women has angered many Turkish women - including his own party supporters and even some of his relatives.

The controversial decision has created a division in Erdogan's ruling Justice and Development Party, AKP, as well as in women's rights organisations close to his government.

One of those is the Women and Democracy Association, KADEM, two of whose board members come from Erdogan's family.

One is his daughter, Sumeyye Erdogan-Bayraktar, and the other is Hafize Sule Albayrak, wife of the brother of Erdogan's son-in-law, Berat Albayrak, the Finance Minister.

Erdogan's youngest daughter, Sumeyye, is a vice-president of KADEM and an important figure in Erdogan's women's movement. After studies at Indiana University in the US, she obtained an MA in economics from the London School of Economics, LSE, in 2008

Following her studies in these prestigious universities, she was made an adviser to his father in the AKP in 2010 on international media affairs, while also working in women rights.

The Istanbul Convention refers to the informal name of the Council of Europe's Convention on preventing and combating violence against women and domestic violence.

President Erdogan was one of the initiators of the convention and Turkey was the first signatory to the convention after the event took place in Turkey's largest city, Istanbul, in May 2011.

But senior AKP names and Islamist intellectuals have recently said the convention undermines family values and promotes LGBTI identities, and some AKP leaders strongly defend the decision to withdraw. "The signing of the Istanbul Convention was really wrong," AKP...