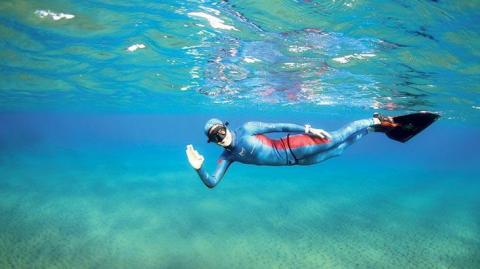 A Turkish national swimmer will dive to break the world record in the "longest distance underwater swimming with one breath" category to draw attention to violence against women.

Birgül Erken, an athlete who competed in many disciplines of free diving, said that she wanted to break the record to draw attention to violence against women and in memory of Pınar Gültekin, who was killed last month.

In mid-July, the brutal murder of 27-year-old Pınar Gültekin by Cemal Metin Avcı, a man who runs a bar in the resort town of Akyaka in the Aegean province of Muğla, sparked nationwide outrage, galvanizing Turkey's women's movements.

Politicians, academics and NGOs also reacted to the murder and mounting femicides in Turkey, where more than 235 women have been killed so far in 2020, according to the We Will Stop Femicides Platform (Kadın Cinayetlerini Durduracağız Platformu).

She will be sharing the message "enough" accompanied by a photo of Gültekin.

The 43-year-old national athlete, who has several Turkey records and is known for her achievements, also took part in numerous social responsibility projects while developing her skills underwater photography and underwater modeling.

The swimmer, who teaches Turkish language and literature at a high school in the Aegean province of Çanakkale, will swim to vie for the world record to shed light on a recurring issue affecting many women in Turkey.

The early trial will be carried out in Ayvacık district of Çanakkale's Assos bay on the 105th anniversary of the Anafartalar Victory, the battle between the Allied Forces and the Ottoman forces during the Gallipoli Wars, on Aug. 10.

"I have full faith in breaking the record. With this record, I want to call on humanity from these...