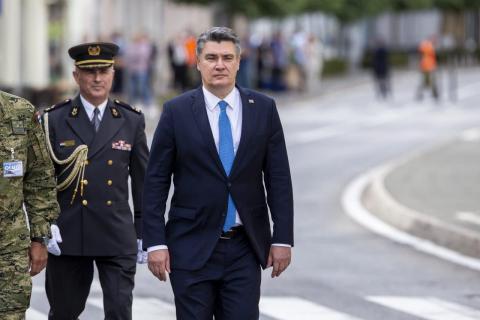 Croatian President Zoran Milanovic on Friday cancelled his attendance at an event commemorating the anniversary of the 1993 Maslenica military operation in the coastal town of Zadar after he learned that some of the participants would wear symbols of Croatian World War II fascist Ustasa movement.

His office said in statement that Milanovic telephoned Prime Minister Andrej Plenkovic and warned him that it this was "unacceptable".

"Since afterwards it was established that people wearing Ustasa insignia and inscriptions were also participating in the official commemoration protocol, the president cancelled his participation in the programme," the statement said.

By order of the president, after the first part of the ceremony, the chief of staff of Croatia's armed forces, Vice-Admiral Robert Hranj, and all military commanders withdrew from the commemoration.

Milanovic took the decision after learning that were in attendance were 1990s war veterans from the far-right Croatian Defence Forces paramilitary group, known for wearing black uniforms with an emblem that includes the slogan 'Za dom spremni' ('Ready for the Home(land)'), which was coined by Ustasa movement.

During World War II, the Ustasa were allies of the Nazis and introduced racist laws against Serbs, Jews and Roma people.

A government-appointed body, the Council for Dealing with Consequences of the Rule of Non-Democratic Regimes, said in 2018 that the authorities should allow some 1990s military veterans to use the 'Za dom spremni'...